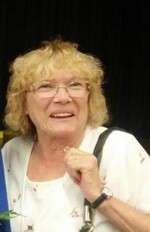 Audrey H. Best, 79 years old, was born on May 10, 1941 in Camden, NJ. She graduated from Woodrow Wilson High School in Camden. She played softball throughout her school years. Audrey started working for Prudential Insurance in Philadelphia, PA. Her brother Bob introduced her to a friend, James E. Best, Sr. Who she would marry on October 28, 1959. James was in the Air Force and they were stationed at Andrews Air Force Base, in Maryland when they welcomed their first son, James, Jr. After his service to our country, they settled in Keansburg to raise their children. They resided on Creek Road in the home that James, Sr. grew up in and was built by his grandfather. Their family grew when they welcomed a daughter, Madlyn and another son, Joseph. Audrey was a homemaker and taught Sunday school at St. Mark’s Episcopal Church. She was known as “Mrs. B”. Years later, she was employed by James Conroy Insurance, Keansburg and also Food town in Port Monmouth. She was predeceased by her parents Joseph and Sara Jones, her beloved husband James E. Best, Sr., her cherished granddaughter Sarah Ann Best, and her three brothers, Ken, Don and Joe. She is survived by her children, Joseph E. Best (Ann Marie), Hazlet, NJ, Madlyn A. Best-Smith (Robert), Jackson, NJ and James E. Best, Jr. 8 grandchildren and 7 great grandchildren and her longtime companion, Robert Terry, Keyport, NJ. Her sister Martha and a brother Robert. In lieu of flowers, please make a donation in Audrey’s name to the Alzheimer’s Association, or 2 of her favorite charities, St. Jude for Children’s Hospital or the Cystic Fibrosis Foundation. Family and friends are invited to pay their respects on Sunday from 2-4pm at the Jacqueline M. Ryan Home for Funerals 233 Carr Ave. Keansburg. Cremation was private.


As per the regulations imposed through the State of New Jersey, there will now be a maximum of 100 people allowed in the funeral home at one time. To accommodate all of Audrey's family and friends, we ask that you please be brief while visiting in order to make room for additional guest to pay their respects; we thank you for understanding. Face protection is REQUIRED as per the state regulations. For further information, directions, or to send condolences to the family, please visit, www.jacquelinemryanfh.com.