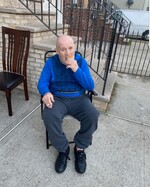 David Hopkins, 80, of Newark, passed away on Wednesday, January 27th, at East Orange General Hospital, Newark. He was born and raised in New York, lived there where he met his wife Letitia and together they raised their family. David was a doorman in Manhattan for many years before he retired in 2001 and moved to the Keansburg area. He loved spending summers in Keansburg, with family, friends and on most occasions his granddaughter Jasmine. He moved to Newark after the passing of his loving wife and was able to spend more time with his family. David was pre deceased by his wife, Letitia Hopkins in 2008 and his son, Richard Hopkins in 2003. He is survived by his daughter, Karen Hopkins- Reeves of Newark; a step-daughter, Linda Sanchez of New York and many grandchildren and great grandchildren. Arrangements were under the direction of the Jacqueline M. Ryan Home for Funerals 233 Carr Ave. Keansburg. Cremation will be private and at a later date David will be laid to rest with his wife in Mount Olivet Cemetery, Middletown