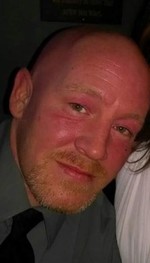 Douglas " Doug" Gogan, 48, of Keansburg, passed away on Wednesday, April 15th, at Bayshore Medical Center, Holmdel. He was born in Red Bank and was a life-long resident of Keansburg. Doug was a corrections officer for Monmouth County. He was an avid Dolphin and Mets fan, he loved playing the guitar and rock & roll. Doug was a big jokester, the life of the party and anyone who has been around him has a great story to tell. Doug was pre-deceased by his parents; Charles Gogan in 1996 and Cecelia Gogan in 2016 and his loving wife; Heather Gogan in 2012. He is survived by his two sons; Daniel Gogan and Tyler Gogan; three brothers and sisters in-law; Andrew and Danielle Gogan, David and Sara Gogan and Russell and Candi Gogan; two sisters and brother in-law; Denise Spitzfaden and Kristin Gogan - Truchon and Eric Truchon; many aunts, uncles, nieces and nephews. Due to the current health crisis a memorial service will take place at a later date. Arrangements were entrusted to the Jacqueline M. Ryan Home for Funerals 233 Carr Ave. Keansburg. Cremation will private.