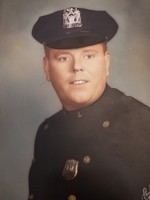 John James Murray Sr., 88, of Keansburg passed away on Friday, August 23rd, at Bayshore Hospital, Holmdel. He was born and raised in Manhattan, prior to moving his family to Keansburg. John served in the US Navy, and upon his discharge he joined the New York City Police Department. During his time as a police officer, he worked as Harbor Patrol. After retiring, John went on to work as the Harbor Master for the Channel Club, Monmouth Beach and also was a bus driver for Shamrock Stagecoach , Keansburg. John was an Ex-Chief and Past President of the Keansburg Fire Company #1 and a member of the American Legion Wilber J. Price Post #273, Keansburg. He loved boats, enjoyed watching the Boston Red Sox and was an avid Gonzaga College basketball fan. John is pre-deceased by his son, John J Murray Jr, a daughter, Ellen Corcoran, a brother, James Murray and a sister, Maureen Williamson. He is survived by his beloved wife of 61 years, Mary (Sabelli) Murray of Keansburg; a son and daughter in laws, Andrew and Kim Murray and Eileen Murray of Keansburg; two daughters and son in-laws, Kathleen and Bruce Taylor of Linden and Mary and Casey Wojtaszek of Middletown; 11 grandchildren and 16 great grandchildren. Family and friends are invited to pay their respects on Monday from 4-8PM at the Jacqueline M. Ryan Home for Funerals 233 Carr Ave. Keansburg. On Tuesday a 10:00AM service at the funeral home will take place and the burial will follow at Mt Olivet Cemetery, Middletown. Letters of condolences can be sent to www.jacquelinemryanfh.com