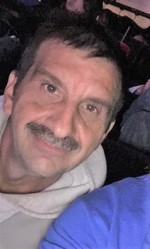 Joseph V. Schoentube Sr., 55, of Keansburg, passed away on Tuesday, October 8th, at home. He was born and raised in Bronx, NY, prior to moving to Keansburg 40 years ago. Joseph was a warehouse manager for Baby Shop in Jackson. He was an avid Cowboys, Yankees and Ranger Fan. He loved to umpire baseball and softball. He loved his family, and the love of his life was his granddaughter. Joe was a loving, caring, and giving person an all-around great guy. Joe was pre-deceased by his father; Walter Schoentube; his loving wife; Dawn Schoentube; and his brothers; Robert and Thomas Schoentube. He is survived by his mother; Margaret Schoentube of Florida; two sons; Joseph V. Schoentube Jr. of Keansburg and Ryan Schoentube of Red Bank; two brothers and sister in-law; Walter Schoentube Jr. of Florida and Ricky and Connie Schoentube of Florida; three sisters and brother in-law; Joann Schoentube of Florida, Sherry and Henry Greenmier of Keansburg and Diane Schoentube; his granddaughter; Aubrey; his two dogs Dallas and Bear and his cat Midnight; many nieces, nephews and cousins. Family and friends are invited to pay their respects on Saturday from 4-6PM at the Jacqueline M. Ryan Home for Funerals 233 Carr Ave. Keansburg. Cremation will be private.