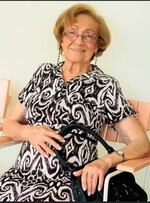 Maria S. Alvarado, 95, of Old Bridge, passed away on Friday, January 29th, at home. She was born in Dominican Republic, she moved to New York City, March 5th, 1965. Maria continued going back and forth from the Dominican to the US, before settling with her daughter a few years ago in Old Bridge. Maria owned several successful businesses in the Dominican Republic such as a Literacy Instructor and owning a Bed and Breakfast. Maria was a smart business woman, a woman ahead of her time. She always had a keen intuition. She enjoyed spending time with family and kept up with family traditions. Every family member had their own special memory of their time they spent together and she always blessed everyone. Maria was pre deceased by her two sons; Rafael Polanco and Enrique “Henry” Polanco. She is survived by her daughter and son in-law; Fatima and Frank DeLuccia of Old Bridge, her two brothers; Lorenzo Alvarado of Dominican Republic and Luis Alvarado of Florida. Six grandchildren; Jessica and Jason Potente, Melanie Morris, Vanessa Polanco, Daniel and Emmanuel Polanco,nine great grandchildren; Jennifer, Chaela, Jordan, Jason, Isaac, Alyssa, Serenity, Wayne, Owen, Rhya, Thiago, Ever and Noah. Arrangements were under the direction of the Jacqueline M. Ryan Home for Funerals 233 Carr Ave. Keansburg. Cremation will be private.