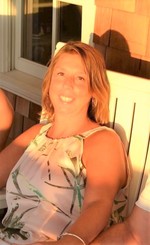 Mary M. “Mimi” Waters, 52, of Keansburg passed away on Sunday, July 12th, at home. She was born in Wilks Barre, Pennsylvania, lived in Highlands and Atlantic Highlands, prior to moving to Keansburg a year ago. Mary was a secretary for the Veteran Administration. She was a member of the Henry Hudson PTO for many years and she enjoyed spending time with her family. Mary was predeceased by her brother, Joseph Lynch and her two sisters Judy and Joann Lynch. She is survived by the father of her children; Richard Waters Jr. of Atlantic Highlands; Her son, Richard and “Victoria” Waters III of North Middletown; her daughter, Katelyn and “Taylor” Waters of Atlantic Highlands; her two brothers and sister in-law, John Lynch of Leonardo and Peter and Brenda Lynch of Highlands; many nieces, nephews and extended family. Arrangements are entrusted to the Jacqueline M. Ryan Home for Funerals 233 Carr Ave. Keansburg. Cremation will be private.