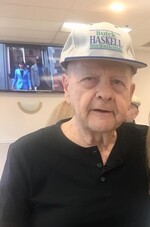 Robert “Bob” D. Sullivan,87, of, Spotswood, formally of Keansburg, passed away on Saturday, January 23rd surrounded by his family. He was born and raised in Hell's Kitchen, lived in Keansburg prior to moving to Spotswood twenty-two years ago. Bob served in the US Army during the Korean War. After the service Robert worked as a bartender, Sullivan Sanitation, Heineken Brewery and for Mountaineer Trucking, Old Bridge as a truck driver, where he finally retired from. He was a former member of the Middletown Elks Lodge 2179 and the American Legion in Spotswood, a communicant of Immaculate Conception Church, Spotswood. He loved going to Atlantic City and Monmouth Park Race Track. Bob also enjoyed singing, playing cards, being a Dallas Cowboy fan and in his younger years going fishing. Robert was predeceased by his parents, Raymond and Edna Sullivan; his former wife, Sarah Sullivan; a son, Edwin (Eddy) Hannon, a brother, Raymond Sullivan and a son in-law, Gilbert Van Wagner, two grandsons Danny Hannon and Trevor Sullivan and a great grandson Luke Wood. He is survived by his wife of 39 years, Eileen; four sons and daughter's in-law, Robert and Ruthann Sullivan, John and Lynn Hannon, Patrick and Anna Hannon, and Danny and Stacy Hannon. Four daughters and son's in-law, Sharon Van Wagner, Debbie and Ray Coleman, Debbie and Phil Reed and Lorraine and George Govich. Three sisters, Patricia Dean, Lorraine Wheeler and Marilyn Winters. 19 grandchildren 29 great grandchildren, 3 great- great grandchildren and many other extended family members. Family and friends are invited to pay their respects on Tuesday from 3-7pm at the Jacqueline M. Ryan Home for Funerals 233 Carr Ave. Keansburg. A religious service will be held at 630 pm. Cremation will be private.

As per the regulations imposed through the State of New Jersey, there will now be a maximum of 50 people allowed in the funeral home at one time. To accommodate all of Robert's family and friends, we ask that you please be brief while visiting in order to make room for additional guest to pay their respects; we thank you for understanding. Face protection is REQUIRED as per the state regulations. For further information, directions, or to send condolences to the family, please visit, www.jacquelinemryanfh.com.