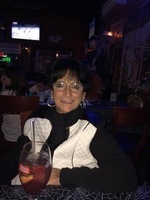 Virginia Frances Parker, 74 of Keansburg, passed away on Sunday, April 12, 2020. Virginia was born on July 25, 1945 in Brooklyn NY where she lived until she moved to Keansburg. Gigi was an amazing woman who worked hard her whole life, as a bartender in the Miami Club, Keansburg, to provide a loving home for her family. Virginia was predeceased by her parents; Salvatore and Frances Rinaldi, her husband of over 50 years; William Parker Sr.and her son; Salvatore Parker. Virginia was one of kind, She lived her life the way she wanted right until the very end. She was known for her long beautiful hair, the love she had for her family, she recently learned to love playing Bingo and Dancing with her husband Billy, she never followed anyone else’s rules and was known to be a strong and out spoken woman. You never had to wonder what was on her mind because she was more than happy to tell you. At times she could make us crazy, we all loved her so much. Life as we know is forever changed and we just pray she is at peace. She is survived by her four children, Marlene & Pete Vallone of Lincroft, Carlene and Francis Farrell of Hazlet, Billy Parker of Keyport and Kelly & Frank Derise of Middletown, a sister and brother in-law; Genevieve and Donald Potenza of California, 16 grandchildren and 9 great grandchildren. Due to the current health crisis, The Parker Family would like everyone to know that despite their desire to have everyone who loved Virginia pay their respects, due to the current health crisis the entombment must be private for family only. The arrangements were under the direction of Jacqueline M. Ryan Home for Funerals 233 Carr Avenue, Keansburg.